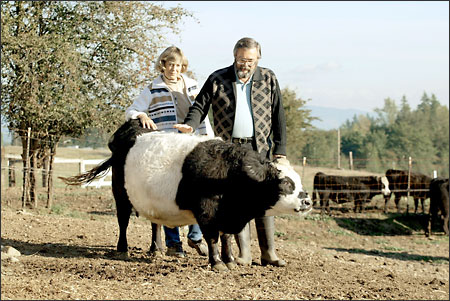 There is a familiar saying … “Behind every great man is an even better woman”. I’m convinced that this well-known quip was penned specifically for Arlene Gradwohl.

We speak often of IMCBR founder, Richard Gradwohl, and the monumental strides he took in the mini cattle industry. He was most definitely a great man. What you may not hear as often is how he could make such a huge impact.

His dedicated wife, Arlene, was to his work what duck’s feet are to a duck. Churning quietly, hidden from view, working hard to ensure that everything on the surface is moving along smoothly. She put her kind and gentle touch into his work without looking for recognition or accolades.

Professor Gradwohl passed away on Aug 24, 2011 at the age of 75. Arlene was 73 at the time. Many people would have quit working on their partner’s dreams at this point, but not Arlene. She may not have had the latest technology or best resources at her fingertips, but what she did have was dedication. She was determined to help Richard’s legacy live on. Sitting in her small office with an old typewriter, she hand-typed each registration. Love in each keystroke as she tapped out entire pedigrees over and over. I can’t help but think that every time she stuck the blank certificate into that typewriter, she thought of Richard. Over the next 11 years, she would type thousands of certificates for IMCBR customers. That, dear reader, is love personified.

In July of 2022 Arlene passed away, quite unexpectedly. Her legacy, however, still lives in the hearts of anyone with whom she dealt. She had a gift of spreading her kind and gentle spirit through every communication.

Arlene Joy Gradwohl was reunited with her Richard on July 16, 2022. She was 84 years old. Imagining that reunion brings tears to my eyes, because a love like that is a rare and precious gift.  – Ben & Melanie Yoder

Below are some thoughts from family friend, Tim O’Donnell. Tim has been dubbed the “Godfather” of the Miniature Jersey breed for all his efforts in developing and promoting the breed. His farm, Dexter Corner, was responsible for the production of hundreds, if not thousands, of miniature Jersey cattle across the US and Canada.

I go back to the beginning with the Gradwhols, meaning when IMCBR was just getting started. At that time, I was Breed Chairperson for the Mini Jerseys registered with the new IMCBR. There were so many conversations between the Gradwhols and myself. That is when I got to know both quite well.

Dick was an all-business type and out to make a name for himself in any way he could. Arlene was his back bone and kind of softened his in-your-face approach. This carried on throughout his life. Arlene put a special touch to those interested in mini cattle. With her friendly voice over the phone and her little personal notes attached to the returned registration papers. Many phone calls over the years from Arlene.  She held a positive attitude all the way through. One time she said she had to get off the phone because they had brought in some hay and it had to be unloaded. Dick couldn’t do it and the hired help wasn’t there so she unloaded it. She was a powerful little woman. I remember when she and her son Milk were traveling all over the US delivering cattle they had sold. Anytime they were in the area they always stopped by for a visit. Whenever she had a question or a possible questionable application, she would call me and see what I knew about it. She never came across as she was in it just for the money. Unlike some of the new upstart registrars of today. She was quite personable to all. – Tim O’Donnell

Be the First to Know!

You have Successfully Subscribed!

You can find out more about which cookies we are using or switch them off in settings.

This website uses cookies so that we can provide you with the best user experience possible. Cookie information is stored in your browser and performs functions such as recognising you when you return to our website and helping our team to understand which sections of the website you find most interesting and useful.

Strictly Necessary Cookie should be enabled at all times so that we can save your preferences for cookie settings.

If you disable this cookie, we will not be able to save your preferences. This means that every time you visit this website you will need to enable or disable cookies again.